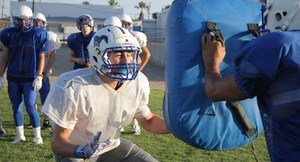 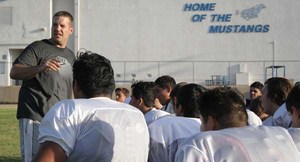 UPDATE: Mauricio Santos is among the several seniors who graduated with the group of seniors from last season. At 55 yards, Santos holds the record for the longest field goal in the NIAA Division 3 South, as we reported last spring. His kicking added a lot of points to the Mustangs' total over his career. With a grade point average of 4.21, he was also one of Needles High School's valedictorians and announced plans to attend Chadron State College in Nebraska on a football scholarship.

NEEDLES — The Mustangs are taking on a new motto, but plans are to keep to much of the same philosophy for both offense and defense this season.

The boys will begin their season with the usual Flagstaff Classic. They will play at noon Saturday, Aug. 27, in Flagstaff. They will face Odyssey Institute.

Coach Matt Fromelt said he and the coaching staff are adopting the word “compete” as this year’s motto. The goal is to work to get players to develop a self-discipline and drive to be able to compete in all facets of their lives, he continued.

He said he wants his players to leave his program ready for life beyond football. They will need that same competitive drive within themselves to succeed in school, work and more, he added.

Regarding the offense and defense, Fromelt said he plans to keep things close to the same as last year. The goal is always to get the most out of the players he’s got, he continued.

Amongst them are Derek Wagstaff, Jayden Yeager, Frankie Garcia, Mario Rabanales, Trey Tsosie, Dylan Hetrick and Adam Jenkins. Fromelt said the returning guys, along with new players, are progressing well in the first few days of practice. They’re working hard and getting a lot of the offensive and defensive concepts, he continued.

This will be important going into what Fromelt is anticipating to be a competitive season. He said there were some changes to the schedule because Calvary Chapel dropped their football program, but that doesn’t lessen the toughness of the season. Fromelt is expecting a lot of parity from the league portion of the season with Lincoln County, Agassi and The Meadows continuing to be strong, he added.

He’s anticipating facing improved Laughlin and Lake Mead teams as well, he said. Getting into the top four positions for playoffs will be tough, he concluded.