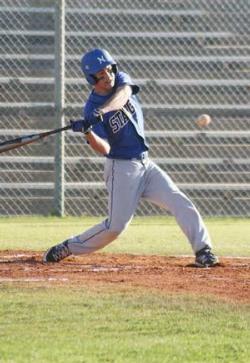 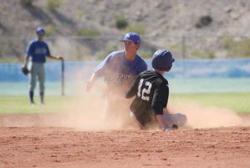 NEEDLES — The Mustangs baseball team let their patience and their bats do the work for them to beat the visiting Calvary Chapel Lions 28-3 and 17-1 in a doubleheader at Jack Hutcherson Field March 20.

The Mustangs also faced Mohave Accelerated on March 17. They won 17-1.

Coach Ken Parker said he and the team had talked before about needing to work on getting the pitchers ahead of the opposing batters and that’s what they did. They got up early and didn’t have to play catch up, he continued.

At bat for the entire doubleheader, Poe-Evans went 4-for-6 with three walks and four runs batted in. Kobee McCorkle went 2-for-6 with five RBIs.

A goal they had was to be more productive early, Parker said. The pitchers were able to throw strikes earlier and that helped.

“(Robinson) got right after it right away,” Parker said. “Right away first batter strike one and that’s where we need to be to keep a good tempo,” he continued.

Parker said the Mustangs also executed on hits. They were patient, something they’ve been discussing and working on, he added.

In the past, the boys have tended to pop up a lot of hits, he said. This time around the boys remained focused and stayed in their game.

They scored runs and played defense, Parker said. They didn’t try to force the issue and let their patience give base hits and that worked well, he continued.

Parker said there was a lot of good hitting from the boys in the MALC game as well. There was an opportunity for the younger guys to get playing time and experience.