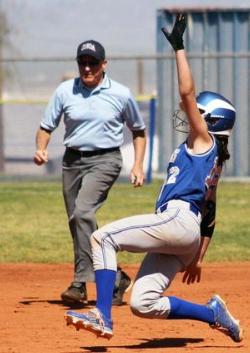 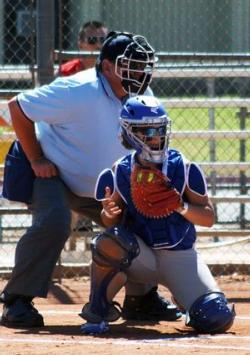 The girls were a bit slow to start in the first game but once they got their bats going they did well, coach Ray Limon said. Brenna Chavez hit an out-of-the-park homerun. Paige Lewis had a triple and Justyce Adamo had a double.

Limon said he was very happy with the way the girls played in the first game. It was a very solid game from them, particularly in terms of pitching and defense. Calvary had a different pitcher who started, Limon continued. That seemed to throw Needles off balance a bit as they had to figure out her system.

There were some infield errors but other than that, most of the time the girls did well, he said. They also ran well in that first game, he added.

Melanie Leslie-Merchain found her swing in the second game, earning a triple, double and two runs batted in. Valeri Vega had a triple. Chavez had a triple and Jaycee Fragoso had two doubles.

Some of the secondary players also got playing time in the second game, Limon said. They made some adjustments to give girls the opportunity to play and see what they can or can’t do for the team, he continued.

Limon said they were a little nervous in the beginning but he was confident they would turn it around and that’s what happened. Girls learned to keep their composure and to keep focus.

The second game also meant a few other personnel changes. Pitcher Kaci Rodriquez came out of the second game due to heat cramps, Limon said. That’s when Fragoso stepped up and closed the game.

Limon said he also wanted to recognize freshman Preslee Murch for stepping up and assuming the second base role.