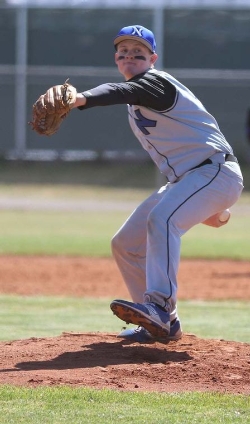 The Mustangs baseball team struggled in their first outing of the season, going 0-4 at the Kingman Tournament March 5-7.

They lost 9-3 to Mohave to kick off the tournament. They then faced Gila Ridge but lost 12-3. Then they played River Valley and lost 9-6 and finally lost to Kingman Academy 12-3.

Coach Ken Parker said the tournament turned out to be a steep learning curve. He and the coaching staff knew the tournament was early for them and that there would be a lot of growing going on, but they had anticipated a bit better results.

The boys were expected to be competitive and have a shot at winning a game or two, Parker said. The team fell short of those expectations.

Many of the same mistakes were made in all four games, Parker said. Mental mistakes and losing focus seemed to be the biggest adversaries.

One of the biggest issues against Mohave was not putting runs across, Parker said. There were opportunities but the boys didn’t finish. In all four games, the boys tended to give up a lot of two out runs, he continued.

He said Needles had the chance to win the game against River Valley but mistakes led to giving up runs to the Dust Devils. Kingman Academy came out quickly and Needles never quite answered, he added.

Parker said the pitchers did okay for their first outing. They will need to get more strikes and get out ahead. Jayden Yeager threw well against Kingman in the first few innings, Parker added.

Offensively, William Dunn had a pretty good tournament, Parker said. Benny Robinson had a good defensive weekend. Specific individual statistics were unavailable at press time. He said that everyone had a hit and contributed. Parker has high expectations for this team and feels they can improve.

Parker said he felt Needles should have been able to walk away with a 2-2 record. There were a couple of games they should have won but early season mistakes and lack of intensity contributed to the additional losses, he continued.

They will have another opportunity this coming weekend. The boys will be in the Route 66 Tournament.